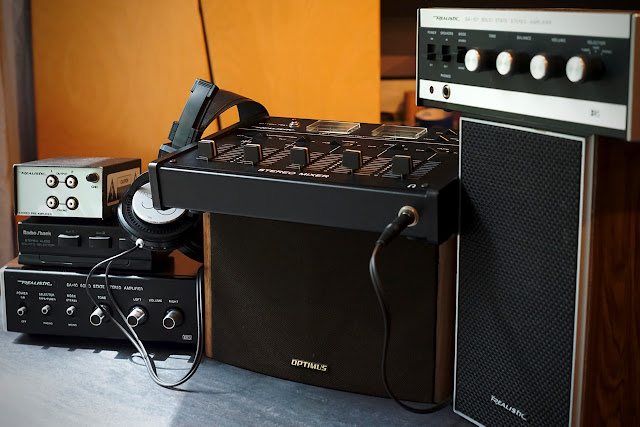 It's been three years since I blogged about Radio Shack's demise. I miss browsing at a Rat Shack store even more.😞 Through the years, a number of audio products from the Radio Shack Catalog  have caught the attention of budget-conscious HiFi enthusiasts.
I've already covered the 40-1354A 5.25" full-range driver and 40-1310 super tweeter in a previous entry. Below are capsule reviews of a few more Radio Shack audio goodies I've played with. Aside from the cool historical factor, IMHO, most can still equal or even outperform many entry-level audio gear today. 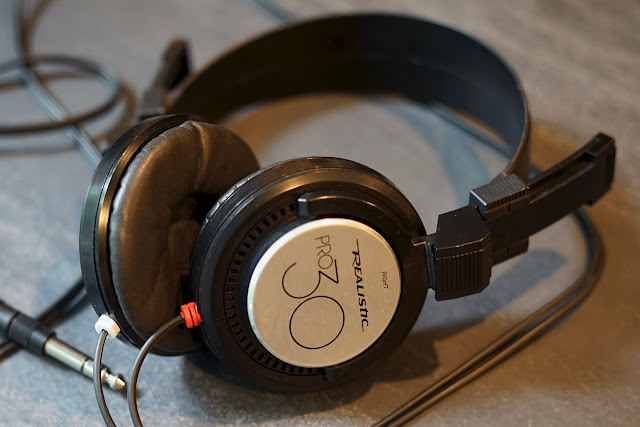 The Realistic Pro 30 was introduced in 1981 for $39.95. Its price was reduced to $34.95 in 1983 and then to $29.95 in 1984. It made its final appearance in the 1986 Catalog. Instead of the usual dynamic drivers, these headphones were fitted with planar magnetic drivers, very unusual at this price point then and now.
It was one of the favorites in the orthodynamic round up thread started by wualta in headfi.org 15 years ago. 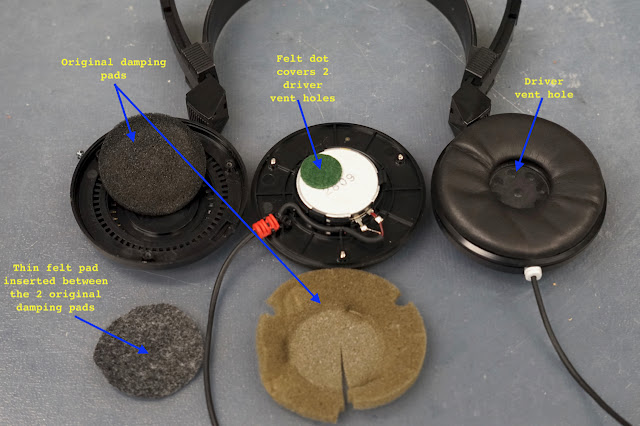 I got this pair very cheap because it needed new cables. In stock form, it sounds very smooth and refined. It can be tailored to 21st century tastes via judicious damping. The felt dot boosts high frequencies while the additional felt pad focuses the audio band a bit. New ear pads can improve the bass response since the flattened originals are no longer giving a good seal. Yup, speaker tweaks are applicable to headphones too!
Even if this is still a work in progress, I already prefer the sound of my modified Pro 30 to my Grado SR80. If you're patient, these turn up for around $30/shipped on eBay. 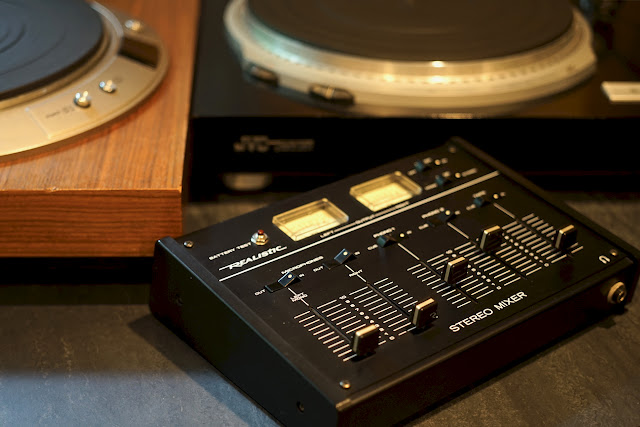 I never got into DJ'ing/mixing but I couldn't resist this Stereo Mixer at a flea market for a couple of bills. It can be powered by 4 x AA batteries or a wall wart that can produce 6VDC at 35 mA. This mixer sports two magnetic phono preamps, 2 microphone inputs + 1 line level, tape out, a preamp output and a 1/4" headphone jack. No ICs or op-amps in the signal path as far as I can tell.
The headphone amp sounds very clean and has plenty of power for modern low Z headphones but may run out of steam driving higher Z or less efficient planars. I've even used this as a preamp in my near-field system with musically satisfying results! 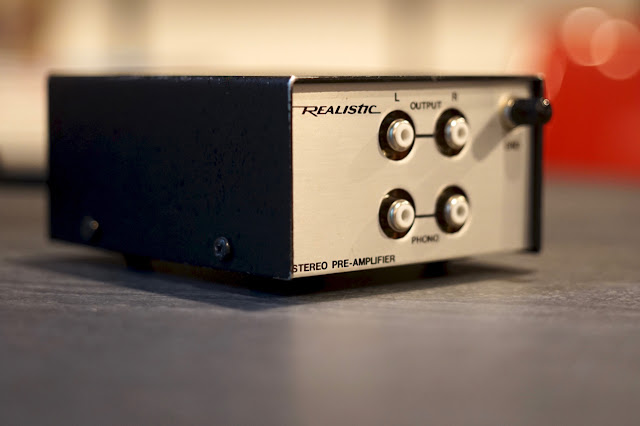 This outboard phono preamp was available in various permutations from the 70s to the early 90s. The circuit topology is very similar to the the above mixer but the sound is more dynamic and detailed due to the higher voltage rail powering the discrete circuit.
Some audiophiles claim that it can hold its own against tube phono preamps. It's good, but not THAT good. When pitted against my stock but refreshed Dyna PAS 3, it offered less resolution and was tonally more opaque. It was totally outclassed by my octal and loctal preamps. That said, I don't think you can find an RIAA phono preamp that can beat this bone stock unit for under $100. 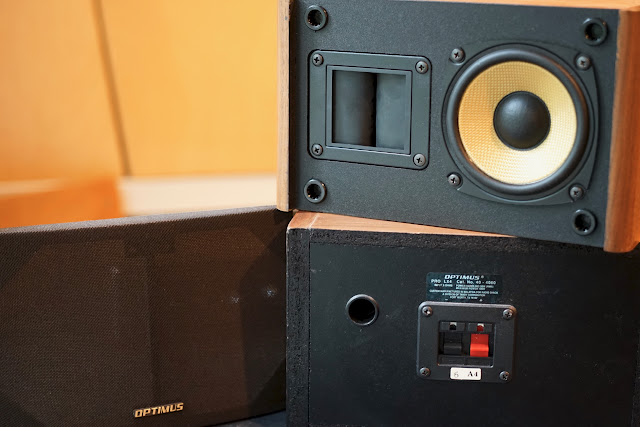 Available only between 1995 and 1996, the LX4 achieved audiophile credibility because of Dick Olsher's review. It used the Linaeum monopole tweeter which provided a lot of air in the high frequencies without the sizzle of run of the mill domes. Unlike the paper coned Minimus 8 below, the LX4's Kevlar coned 4.5" woofer’s medium efficiency isn't as good in tracking micro dynamics. I voiced my original Simple 45/2A3 amp using a pair of Altec 755Cs in open baffles cross referenced to a pair of LX4s in the mid 90s.
Even if this was, and still is, a smooth and coherent sounding speaker at its price point, I wouldn't go as far as choosing this over the BBC LS3/5A. 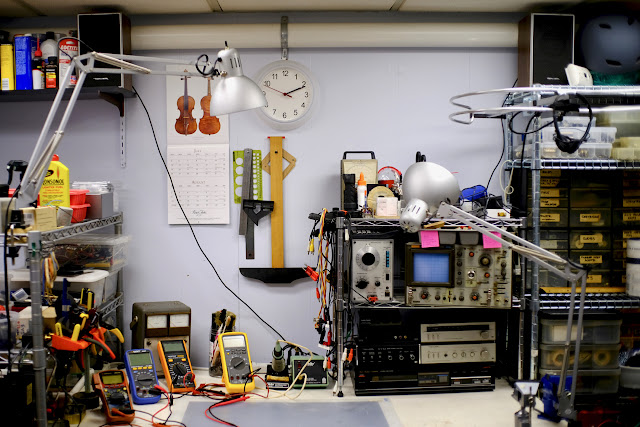 A test bench isn't complete unless it has the facility to 'sound test' a freshly minted audio project or a newly repaired audio component. 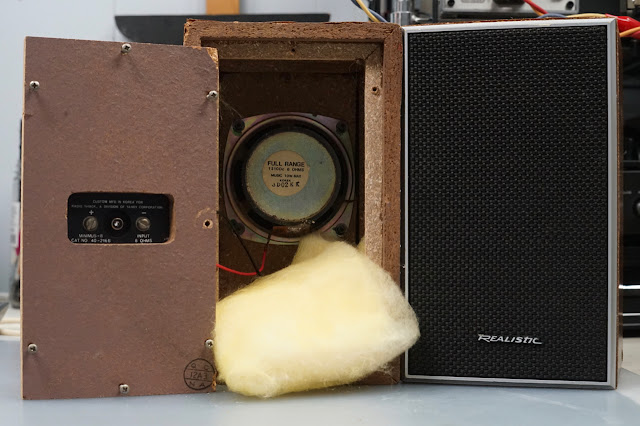 While I was a high school junior, I owned a pair of Minimus 8s driven by a Realistic SA-10. This speaker evolved from the Solo 103, which used various incarnations of the classic Fostex/Foster 103 4" paper coned full-range driver.
I got this ca. 1982 pair at Goodwill. Considering their diminutive size, these speakers are quite efficient at 89dB/1W/1M. To offset the upper midrange/lower treble tilt, these sound their best mounted flush against the wall. It's an easy load even for a 250mW per channel amp and provides nice background music while soldering.😉

Introduced in 1985, the TM-150 and SA-150 tuner/amp combo was riding on the mini-sized components trend of that era. The AM/FM TM-150 tuner has good sensitivity and can pull stations even in my basement shop via a simple omni antenna.
The SA-150 amplifier can trace its roots to the Germanium-equipped SA-175 amplifier from the late 60s, followed by the SA-101 from the mid-late 70s, which was succeeded by the SA-102 in 1980. Towards the end of the SA-102's production run, the accounting department tried their hand at circuit design and grafted an LA4440 IC chip amp on the same chassis.😡 This topology was carried over to the SA-150. Surprisingly, it doesn't sound bright or grating. On the contrary, it sounds dark and grainy.😞 It's ok for background music and has a value for the money MM phono stage.
The SA-150 was cosmetically altered in later years and was still available as the RCA SA-155 in the 2002 catalog.

Since I owned a Realistic SA-10 amplifier in my youth, I got inspired to search for another sample when I noticed the similarity of its circuit topology to the John Linsley-Hood 1969 Class A amplifier .
However, the resemblance is only superficial since the JLH 1969 operates in pure Class A and the output stage is quasi single-ended while the Realistic SA-10 is a four transistor push-pull amplifier operating in Class AB1.

!!!WARNING!!!
The voltages found in these circuits can be lethal!

During its long life, the SA-10 was also subjected to cost cutting measures. The later 31-1982B sported IC chip amps in the output section. 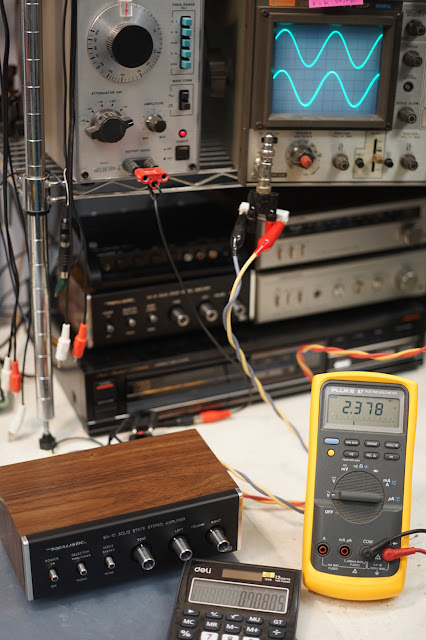 Radio Shack could justify their use of IC chip amps on paper since I measured 700mW per channel from both versions. But the similarity ends in the test bench. Even if a different IC chip amp was used, the later 31-1982B also sounds dark and veiled just like the SA-150, whereas the all transistor SA-10 (31-1982A) has tube-like qualities in the midrange.😊
To be honest, I don't think the cap upgrades made a significant improvement in sound. I changed the output capacitors to protect my speakers and headphones in case of DC output in the speaker terminals due to leaky caps. However, I highly recommend disconnecting the loudness compensation circuitry to remove the "Bose Wave Radio" crud.😆 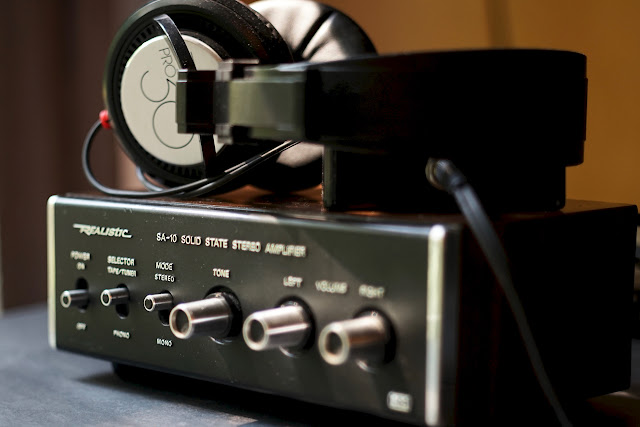 With my DIY headphone adapter attached, the SA-10 (31-1982A) also does a good job as a headphone amp. The separate left and right level controls don't bother me and if I need more inputs I can press my 42-2112 audio source control selector into service.

If your amplifier doesn't have a headphone jack and puts out 2 watts per channel or more, you need this headphone coupler. This device has attenuating resistors inside to protect your headphone drivers (and your ears 😆) from getting fried. 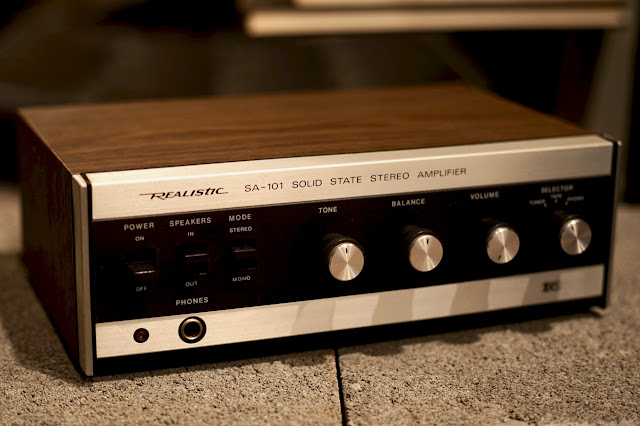 The SA-101 was the unit that got away in '79 because it equalled the cost of my SA-10 + a pair of Minimus 8s. This amplifier hails from the generation of discrete solid state circuits. It has an RIAA phono preamp + two line level inputs, a balance control and 1/4" headphone socket. It's the ideal amp for a retro vinyl LP + headphone set up!😎 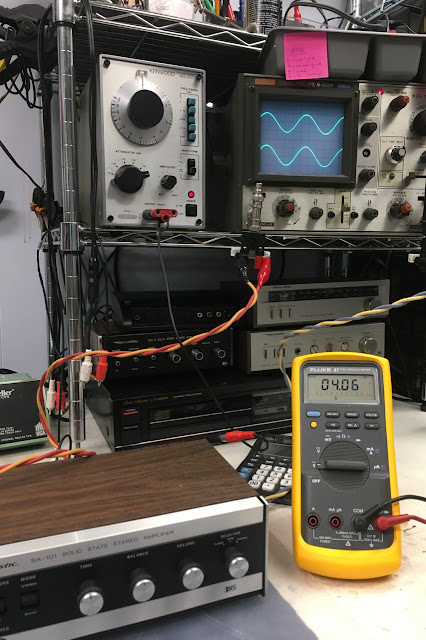 The amplifier circuit is virtually identical to the SA-10 (31-1982A) except for the increased voltage and beefed up power supply. Thus, my Fluke 87 measured 4V rms to an 8 ohm load or 2000 mW per channel. This may not sound like much but it drove most of the speakers in my collection to musically satisfying levels. Just like the SA-10 (31-1982A), it has a tube-like warmth and depth in the midrange.😊
Why would I listen to the SA-101 and the early version of the SA-10 rather than their later IC chip amp brethren or the Class D chip amp I got from Parts Express a couple of years ago?
First of all, I'm not a bass head and I don't listen at ear splitting SPLs. I also put more emphasis on sonic refinement which is easier found in flea powered amps (tube and solid state) designed by engineers who honed their skills (and ears) during the vacuum tube era, exemplified by Mr. John Linsley-Hood!

The LA25A amp was OEM'd in Japan for Lafayette in the early 70s. This unit is very similar to the Lafayette LA25 sans magnetic RIAA phono input. 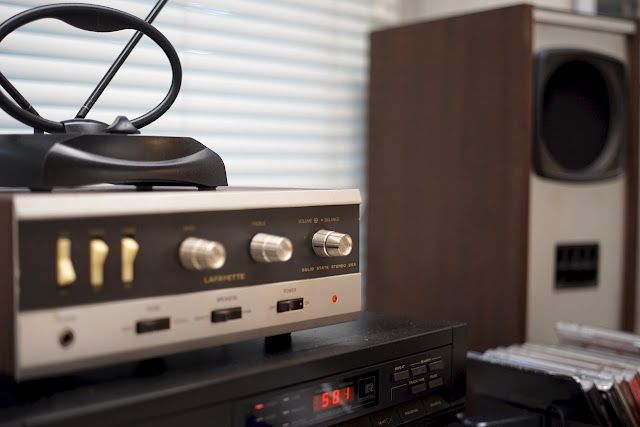 The Akai Jet Stream is a compact transmission-line (TL) cabinet manufactured in the Philippines in the early 70s. It supposedly contains a Fostex/Foster 103 driver variant. Unfortunately, I can't confirm this without disassembling the woodwork.
This is a pretty good sounding speaker. The upper midrange forwardness inherent in the Fostex/Foster 103 driver is neutralized by the TL loading even if there's still not much activity below 90 Hz. 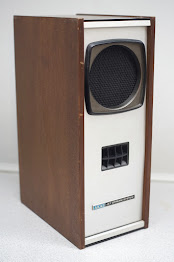 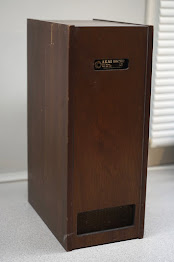 The speakers belonged to Tish's dad. He was a Filipino cardiologist and these Akai SW132s were the rear speakers of a quadraphonic system gifted to him by a patient. He also left behind a pair of Jensen Triettes and a Rek O Kut R34 belt drive turntable, which were part of his stereo rig while doing his fellowship in Cook County, Illinois in the early 60s.
According to Tish, he was also into photography and developed his own negatives. Unfortunately, I never got to meet him. We would've enjoyed talking shop over ice cold beer since we shared a lot of common interests!
Email Post
Labels: Amp DIY Audio Full-range driver Headphones LP Playback Preamp