They can carry on with their SINAD and MTF charts while I enjoy the 21st century with retro tech gadgets, which were designed by human ears and eyes aided only by primitive computers and instruments.

Leica M and LTM lenses have significantly appreciated in value, with M42 lenses following at their heels. However, the German lenses below can still be found at reasonable prices in DKL and Exakta mounts. These are just as easily adapted to current mirrorless interchangeable lens camera bodies.

I pulled this Schneider Kreuznach Xenar 45mm f2.8 out of a Kodak Instamatic Reflex camera. It doesn't have the sharpness nor resolution of its bigger brother below but it renders nice colors with low to medium contrast. The short throw focus and compact design makes it a nice street shooter.

The Schneider Kreuznach Retina-Xenon 50mm f1.9 was the standard fast lens supplied with the Type 034 Kodak Retina Reflex S, III and IV + Retina IIIS rangefinder camera. It outperforms all the lenses discussed here in terms of speed, sharpness, resolution, color rendition and contrast. This lens is big and heavy.
This Voigtländer Color-Skopar 50mm f2.8 is normally found in a Bessamatic, also a compact design like the Xenar above but heavier. It's almost at par with the Xenon in terms of sharpness, color saturation, resolution and contrast. However, vignetting becomes apparent at wider apertures compared to the Xenar and Xenon.

The monochrome film pics above were  taken by the DKL lenses mounted on my Fujica ST801 M42 camera body via this DKL>M42 lens adapter. This adapter can also be mounted to an M42 adapter for your favorite mirrorles interchangeable lens digital camera body.

NOTE: DKL lenses with built-in aperture rings aren't compatible with either of these lens adapters. Scroll down this link for more info.

The Exakta VX camera was immortalized by James Stewart's character in Alfred Hitchcock's Rear Window. I don't know if Hollywood contributed to the asking price for these cameras, but we'll focus on its cheaper siblings instead.
Based on the serial number my Ihagee Exa + Isco-Göttingen Westar 50mm f2.8 was produced between 1956-1959. It's a very basic design with 4 shutter speeds -1/25, 1/50, 1/100, 1/150 + B and the mirror was integrated with the shutter mechanism. It came with a waist level viewfinder, which can be replaced with various focusing prisms including an eye level viewfinder that's interchangeable with the higher end Exakta. The Westar lens is a basic single coated triplet. I got it from my friend Mike, who's also an audio hobbyist.
I've only shot two short rolls with this camera. I'm having issues getting used to the waist level viewfinder, which might be psychological since I don't have trouble using medium format twin lens reflex cameras.
I've been hunting for a Meyer Görlitz Domiplan 50mm f2.8 in M42 for many years but couldn't justify the asking prices for a single coated three element lens. So I ditched the M42 idea and got an Exa II camera with a Domiplan lens cap instead. The Exa II was upgraded with a focal plane shutter with speeds from 1/2 - 1/250 in geometric progression + B and was fitted with a fixed eye level viewfinder. This camera was manufactured between 1960-1963, which makes it just a tad older than I am.
As long as the Exa and Exa II are loaded with ISO 100 film, the limited shutter speeds is a no brainer. It's just like shooting my Leica II and its Fed and Zorki cousins. Just as I expected, the Domiplan and Westar triplets can be very sharp in the center. From there, it builds up lots of character towards the edges, especially at wider apertures. 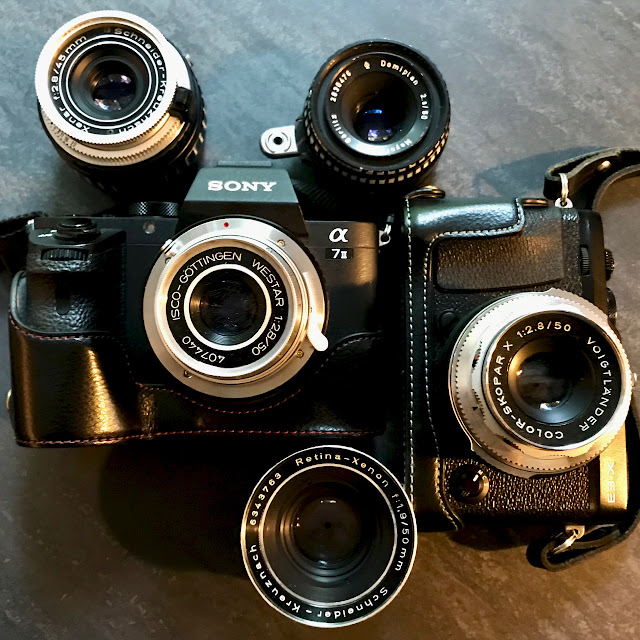