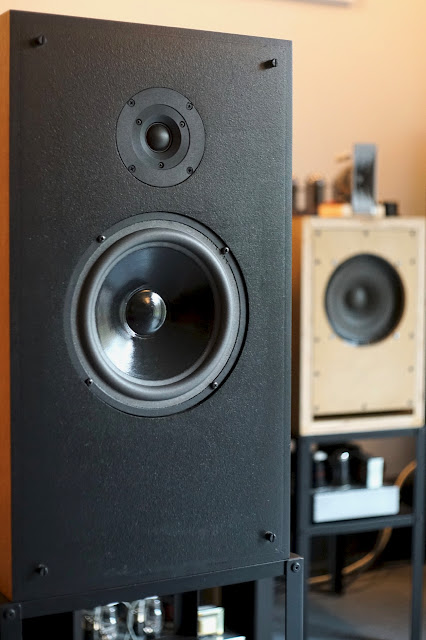 With the foam issue out of the way, it's time to wrap this up! 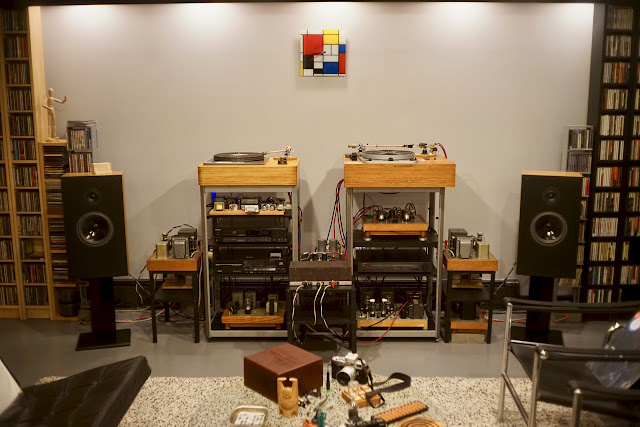 If I never allowed myself to be conned by the Junkyard Jukebox guy to subscribe to his Sound Practices audio rag in the early 90s, I may have soldiered on tweaking my classic push-pull EL84 and EL34 amps and upgrading my LS3/5As (or adding) to this pair of Snell Type JIIIs (or maybe even Type Es) in my listening room.

But things didn't turn out that way...

I succumbed to the temptation of single ended triodes + Altecs! 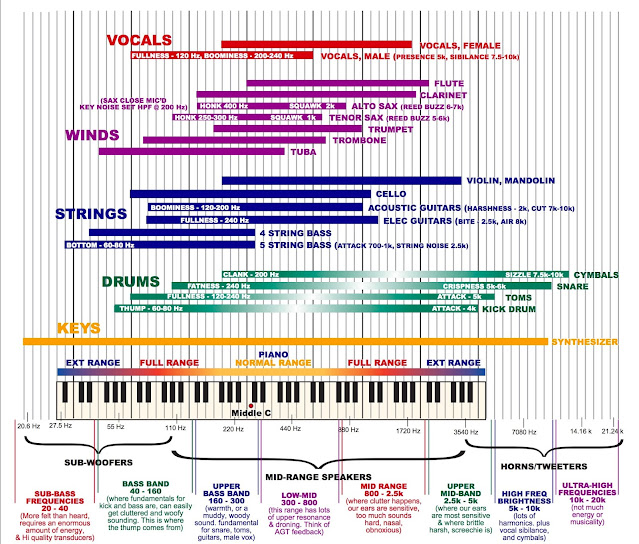 In my reality check article, I used the above chart to associate frequencies with the vocal range of humans and acoustic musical instruments. Please use it as a guide to the RTA traces and discussion of frequency ranges below.
Lou Donaldson on Snell Type JIIIs

The Snell Types E, J, and K have developed a reputation as single ended triode (SET) amp-friendly speakers. Arguably, my pair of Type JIIIs can be a good stop gap but I'll try to explain in the simplest terms as to why, in the final analysis, they don't meet my criteria for flea power amplifiers designed with "it's the first watt that counts" ideology.

Since I couldn't find a late 80s to early 90s Vifa catalog, I based all the specs from the above information provided by Snell. The low(ish) nominal impedance (Z) of 6 ohms is an advantage when driven by current source devices such as solid-state amplifiers, which can typically supply more power to a lower Z load. OTOH, vacuum tubes are inherently high impedance/voltage source devices, thus requiring output transformers to drive lower Z loads. However, any well-designed tube amp with an 8 ohm tap from the secondary of the output transformer shouldn't have problems driving the Type JIII.

While the man cave is hardly anechoic, this RTA trace is smoother compared to anything I've taken from any of my Altecs. It pretty much tracks the manufacturer's specs.

In spite of the fact that the Altec 753C's RTA isn't quite as smooth, it has a half octave greater extension in the low end. The top end also starts to roll off earlier, at around 13kHz. But as further discussed below, the performance of the Altec 802D compression driver + Altec 32C belies its 40s Western Electric roots.

The radiating area of the Altec 414A cone at 95 square inches is 2.5 times greater than the 8" Vifa M21's 38.5 square inches. Both use paper cones - the Altec cone is left bare and suspended by a treated accordion surround, while the Vifa uses high compliance foam and its cone is treated with some form of damping compound. The added cone mass from damping helps low frequency extension. Regrettably, it also reduces speaker sensitivity, among other things.

In wide range mode, the 414A's 95 square inches of radiating area covers a frequency range of six and a half octaves, starting from around 40Hz-3500Hz. That's just a few notes shy of a piano's range at both extremes as well as the fundamental notes of most acoustic musical instruments and easily, the entire human vocal range. This driver sounds very natural to my ears and plays smoothly with no detectable glare or shout manifested when listening to music. I’m happy to report the tiny spike before 1kHz isn't audible to me. 😉
The Vifa M21's smaller radiating area of 38.5 square inches tasked to reproduce five and a half octaves from 49Hz all the way to its 2700Hz roll off point is a greater challenge.
The 414A goes lower than the Snell JIII but not quite solid down to the claimed 30Hz rated fundamental. With a 99dB/1W/4ft sensitivity, it has an 8dB advantage over the Snell Type JIII's 1.6 cubic foot (cf) ported box rating of 91dB/1W/1M. Housed in a 4 cf bass reflex cabinet, the 414A can definitely move a whole lot more air with minimal power input.
The type JIII's crossover is a bit more complicated than my Altec 753C XO below. Encircled in red is a paralleled choke/resistor/capacitor EQ network for the Vifa woofer. This shapes and/or controls cone resonance in the midrange. Unfortunately, the EQ network also absorbs power.

Case in point, BBC engineers' extensive use of EQ in the LS3/5A crossover made it notoriously inefficient. But to their credit, whether it was the earlier 15 ohm or later 11 ohm version, it was a friendly load, especially to tube amplifiers.

Since the 414A has no serious peaks or dips, which I verified through years of listening and later confirmed via RTA, I chose to run it in wide range mode in which the woofer rolls off mechanically. This preserves the efficiency/sensitivity of the woofer and makes the crossover simpler since it only involves a 4 uf capacitor acting as a high pass filter. By using non-inductive resistors, the Altec 802D compression driver is attenuated to match the 414A's sensitivity. Then I adapted the high frequency EQ circuit from the Altec 30923 to tweak the shape of its top end response.

Snell employed a sharper 12dB/octave slope high pass filter for the dome tweeter to cut in @ 2700Hz while I blended the 802D compression driver/32C horn combo at a gentler 6dB/octave slope @ 3500Hz in the Altec 753C just where the 414A top end response starts to taper off.

My old school high frequency horn loaded system uses the Altec 802D compression driver in conjunction with the 90° H x 60° V dispersion Altec 32C horn originally designed by Western Electric for their 753C monitor system. It's merely coasting along from 3500 Hz, generating the top most octaves and harmonic overtones compared to the hard-at-work direct radiating Vifa dome tweeter diaphragm of 1.23 square inches struggling to replicate the final octave of top end fundamentals from 2700Hz. Hence, the Altec horn system reproduces much faster and cleaner transients with ease, while also enhancing the already effortless presentation of micro and macro dynamics of the high efficiency 414A woofer.

I'm not set up to plot a reactance chart for the Altec 753C and Snell Type JIII but after using them with various amps in my collection, I guesstimate that both proffer a benign resistive load. However, the 16 ohm nominal impedance, simpler crossover of the Altec 753C and its greater efficiency are a godsend to low damping factor single ended directly heated triode amps.

How far has speaker design progressed?

Ever since I built my first pair of open baffles, evaluating drivers in wide range mode in order to gauge their ability to reproduce an accurate midrange has become routine. Listening to the Vifa M21 woofer in this manner wasn't a very pleasant experience because it sounded very dull. This is in stark contrast to the snappier midrange of the Altec 414A, which I've been using in wide range mode for many years. Likewise, the Vifa 8" was totally outclassed by a handful other woofers and wide range drivers in my collection including the 10" Altec 406Z and Altec 756B.
It's a no brainer that the long travel foam suspension + cone damping extended the low frequency response of the 8" Vifa. But to my ears, this was achieved to the detriment of midrange performance. Is bass extension really more important than midrange accuracy in the high-end audio era? Why is cone damping so prevalent in modern drivers? Western Electric, Jensen, Altec, and their contemporaries all used bare cones.

During the era of Western Electric and Altec, engineers used their ears, guided by cutting edge technology test equipment. This can be gleaned from contemporary ads and press releases. I can't help but wonder if the Vifa woofer was designed merely to satisfy test instrument requirements and laboratory standards without any ear testing involved. If that is the case, is that what we consider progress? 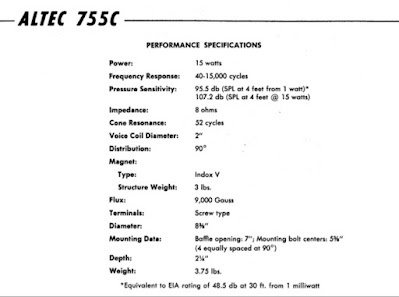 I chose the Altec 755C over the near mythical Altec 755A for this feature because IMHO, it is a worthy benchmark for an 8" wide range driver that is still quite accessible and affordable in the real world. Based on the above specs, by the time Altec introduced the 755C in the late 50s (or early 60s?), they had conceded to the spec wars triggered by the commercialization of stereophonic equipment. I've listened to the 755C loaded in an OB, 2cf box or the Silbatone cabinet but never heard a solid 40Hz low end, merely well defined harmonics of that fundamental.

Granted the 755C can go a bit lower, subjectively, its low frequency extension isn't significantly greater than the 755A. I'm glad though that Altec was able to retain much of that captivating midrange + dynamics even if it's not quite as realistic as its older Western Electric-designed 755A sibling.

The Silbatone + 755C combo loses about an octave at the frequency extremes vis a vis the Snell JIII but has a 5dB advantage in sensitivity. Despite the spikes and dips in its RTA trace, I much prefer listening to the Silbatone 755Cs. Maybe the dips and spikes = musical?🤔

Whether driven by my SET amps, Dynakit ST35 or Nobsound/JLH 1969 clone, the Snell Type JIII sounded veiled and anemic compared to the Altec 753C and Silbatone 755C. With the Snells, I have to turn up the volume a couple of notches to be engaged musically but with the Altec 753C or Silbatone 755C driven by my weakest 750mW per channel SE71A amp, I already hear subtle details even at background sound pressure levels (SPLs). Understandably, the JIII could not compete with the Altec 753C at the loudest end of the spectrum since it doesn't have the physical size to move as much air. But considering Snell's reputation, I expected better resolution and nuances at low to medium SPLs.

The most convincing full range sound I got from the Snells was when they were driven by the Music Reference RM9 amp, a push-pull parallel/triode connected EL34 stereo amplifier producing 35 watts per channel with the negative feedback set at minimum. Alas, with this combination, the irresistible charm of the single ended directly heated triode amp is lost...I can't have my cake and eat it, too.😔

Through the years, I’ve tested a few vintage and contemporary 8” wide range speakers but haven't found any which could closely approximate the 755C’s sound quality. The design isn’t rocket science and if Great Plains Audio still has the original tooling, I don’t see any reason why the humble 755C PA speaker can’t be reproduced at a reasonable price. That would be a great boon to single ended directly heated triode amp aficionados, especially those who have limited space in their listening room.😊

Contrary to current trends in speaker cabinet design, the wider front baffle area of the Altec 753C cabinet (and to a lesser extent, even the Snell Type JIII), enhances projection by acting as an acoustic soundboard. Western Electric and Altec speaker systems were usually fitted with wings in theater installations, which is the main reason I've been an advocate of the wide open baffle. In principle, this is practically no different to the fully open lid of a grand piano during a performance in a concert hall.

The Snell Type JIIIs can give a glimpse of what directly heated single ended triode amplifiers can do. But these are definitely not end game speaker systems for those who want to indulge in the delights of flea powered single ended directly heated triode amps. As competent as the Snells are and given their already above average sensitivity (compared to typical high end audio speakers), they could never spook me into believing musicians come alive in my man cave the way my Altecs can at times. For some organic reason, I can also listen to my Altecs for extended periods without listening fatigue creeping in. Keep in mind though that the empirical and subjective observations embodied in this article only reflect my musical aesthetics and priorities. YMMV.

I hope I was able to illustrate that there's no myth or magic to a fine sounding and efficient speaker system. All it takes is a basic understanding of the physics of sound and learning how to compromise.